Mobile marketing is quickly becoming one of the most popular arenas in the online advertising industry. As the number of Smartphone users rises on a daily basis, marketers search for creative ways to engage this tech savvy crowd. Mobile gaming application platforms present such an opportunity. Games are dominating mobile app purchases; it seems as though consumers are more interested in entertainment than practical services i.e. GPS.

But companies are finding that the majority of mobile users are open to certain types of in-game display ads, provided they have an incentive attached. For example, Angry Birds is a fun and addicting game that was originally designed for the iPhone in 2009. Its rousing success prompted the developers at Rovio to move into the Android and Symbian markets in 2010. The company decided to change things a bit by offering users a chance to download a version of the game that includes ads for free or pay for an ad-free alternative. Since then, consumers have shown a marked preference for the former edition; people downloaded the two at a rate of 11 million to 7 million, respectively. Rovio reportedly earns approximately 1 million dollars a month in ad revenue alone! 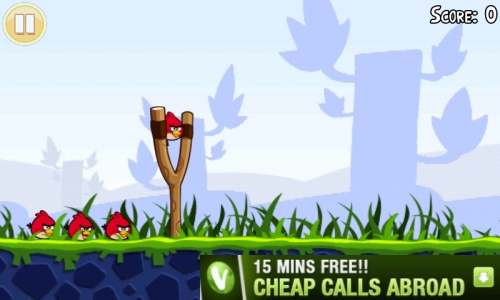 The game has taken on a life of its own thanks to an innovative marketing technique. Fans can purchase plush toys of their favorite characters, and there’s a board game as well as a feature film in the works.

While most of the company’s profits still stem from paid downloads, the Angry Birds model proves that in-game marketing holds tons of potential. Juniper research predicts that in-game advertising spending will continue to rise and spur job growth in the process. If their projections hold true, then income earned off of ad revenues will exceed that of paid downloads by 2013. This is great news considering the fall out of in-game ads in the video game world. One of the largest gaming companies, EA, tried incorporating ads into some of their products, but eventually decided to nix the idea at the end of 2010. EA claims that the venture did not live up to RIO expectations, so they abandoned the project entirely. However, it’s worth noting that these types of campaigns are conducted primarily for branding purposes. Branding is an abstract concept, which makes it hard to precisely quantify the impact of associated ads. Demographics should also be considered part of the equation. Most of EA’s games are geared towards young men whereas Angry Birds has universal appeal. These are some of the relevant facts to consider when determining whether or not this kind of investment will be worthwhile. Hopefully the folks at EA will reconsider once they read the Juniper study.