Television has lost its charm in the recent past with the likes of over-the-top media services like Netflix and Hulu giving it a tough competition. With such decline in the user ratio, the hype surrounding the overtake of TV by the OTT services seems a feasible proposition. With the TV services likely to take a hit.

Here are some numbers which show why and how will they be hit. Though the numbers and shifts might not say a long story, OTT services are here to stay as per the experts.

What do the numbers suggest about OTT Services?

Numbers suggest that OTT services will soon start to give a tough competition to the TV service providers though they are well ahead of OTT at this time. Remember that the same viewers between the age of 10-30 who used to be a TV viewer have changed themselves to regular OTT viewers. Since 2016, the Number of TV subscribers in the US has dropped from 97 million to around 82.6 million. On the other hand, the OTT subscribers have increased from 58 million to 96 million during the same period. This research was conducted by Convergence group and it shows a drastic shift. The traditional TV revenue has also taken a hit as the revenue shows an estimated loss of 41% till 2017 alone.

The competition not only comes from traditional overcast but also from media companies who have started to make their own OTT. With OTT, users also get varieties of shows and offer while TV does not provide anything of that sort. With OTT services also starting to bring live sports and matches, TV has started to lose its plot also. As per Brahm Eiley, President of Convergence Research,

“should be very concerned about OTT’s meteoric rise and the downturn in TV access subscriber eyeballs, especially since the largest providers of OTT do not, for the most part, offer to advertise. Within a few years, OTT will be in more households than TV access.”

OTT Services Contain something for everyone 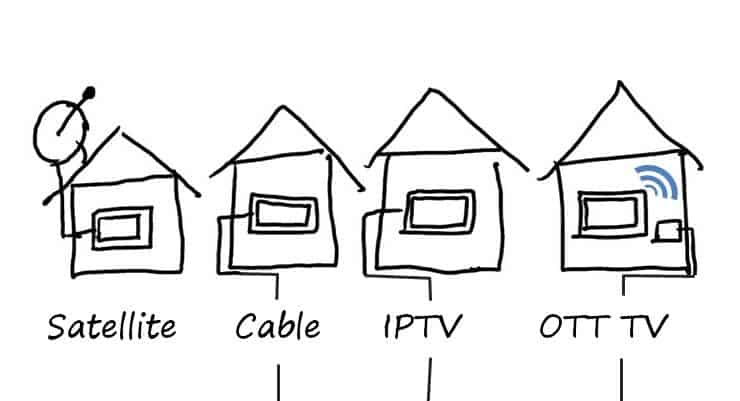 The IAB defines OTT devices as those that “can connect to a TV (or functionality within the TV itself) to facilitate the delivery of Internet-based video content (i.e., streaming boxes, media streaming devices, Smart TV’s and gaming consoles).” Viewers have flocked to OTT devices as these platforms enable communal and more immersive viewing. OTT devices also aggregate viewers’ favorite content in a single location, providing a one-stop-shop for premium video. In addition, OTT holds advantages for Advertisers – the large screen is inherently viewable, and the living room environment is conducive to higher engagement. Advertisers also have the potential to achieve incremental consumer reach among cord-cutters.

What the Future beholds for OTT Services? OTT has a positive future ahead. Viewers are increasingly gravitating toward the big-screen experience and the centralization of channels and subscriptions in a single location. Publishers are investing more in growing their OTT presence and expanding their content libraries to capitalize on the increased viewership and create additional inventory. Technology and measurement companies will develop advanced capabilities to ensure that OTT capabilities keep pace with the rest of the digital market.  Programmatic functionality will improve in parallel to meet the increasing demand in a scalable way. Monetization on the platform will grow across all content types as Advertisers become more educated on its advantages and considerations.